The article below was first published in the 22 November edition of Rail Magazine www.railmagazine.com With big ambitions in the UK, SYSTRA is a global leader with a difference when it comes to rail, says Deputy CTO and Technical Production Director HENRI VERGNAUX

SYSTRA is one of the world’s leading multi-disciplinary engineering consultancies for rail and urban transport, as demonstrated by its impressively large and varied worldwide portfolio of projects.

Specialising in all forms of rail, including metro, high-speed, conventional and light rail, RAIL readers needn’t look too far to see how the company is helping to provide high quality and cost-effective transport systems in the UK, as well as abroad.

In one of its largest UK contracts, at Crossrail, SYSTRA forms part of the Project Delivery Partnership that is responsible for managing and integrating project delivery.

More than 450km of SYSTRA-developed U-shaped viaduct has been designed and built since 1992. The world’s longest metro line in Shanghai includes 45km of a highly cost-efficient, time-saving construction solution, as pictured here. P. WACK/CAPA/SYSTRA. 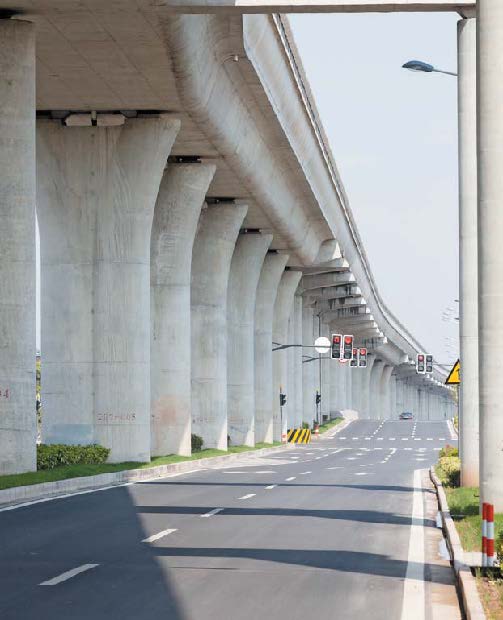 But where SYSTRA is hoping to make more of an impact in the UK is in metro and light rail, given that it is involved in almost 50% of metro lines currently in development across the globe, and 60% of worldwide automated (driverless) metro projects.

This includes project manager roles as part of consortia for Dubai metro’s 2020 World Expo extension and Riyadh, one of the world’s biggest metro projects, where it is also supervising construction on three of the network’s six automated lines.

“Our ambitions for the UK are based on our worldwide experience, as we are heavily involved in so many high-profi le projects,” says SYSTRA’s Deputy CTO and Technical Production Director Henri Vergnaux. “This includes our major role providing project management assistance for systems and infrastructure on the Grand Paris Express, which is one of the biggest automated metro projects in the world.

“We are also involved in many ‘brownfield’ metro projects, where we switch from an existing conventional system and rolling stock to a new automated system. We can manage and implement this migration and the refurbishment of rolling stock to enable automation, as we have done in Santiago (Chile) and in Paris, for example.”

In addition to demonstrating SYSTRA’s deep knowledge and understanding of high-speed, conventional and light rail systems across the world, the Group’s global portfolio also showcases another of its key differentiating factors.

That is its flexibility to work equally effectively either as part of the client organisation on projects or in support of individual contractors, while continuously delivering projects on time and on budget.

SYSTRA’s strong focus on optimising its designs from a maintenance and operational perspective is another unique selling point, helping the client or contractor to reduce operational (OPEX) and capital (CAPEX) expenditure.

Vergnaux adds: “SYSTRA is able to deal with all technical skills necessary to design and build metro, conventional or high-speed lines from design to civil works right up to systems such as power supply and track work - we have it all in-house.

“When a client or a contractor asks us to provide any of these services we can provide each of these aspects fully, while our capacity to deliver on time and on budget is part of our DNA.

“In addition, due to the make-up of our shareholders (which include French national operator SNCF) we are able to optimise the total cost of ownership (construction, operation and maintenance).”

As lead design project partner of the COSEA consortium, SYSTRA played a major role in the South Europe Atlantic (SEA) high speed line that opened in July. It is also a tier one member of the MESEA consortium, which is responsible for the line’s maintenance for the next 44 years.

SYSTRA helped reduce maintenance costs for the 7.5 billion euros (£6.7bn) line using specialist techniques, such as designing 250 overbridges that have no bearings on the piers next to the high-speed line. Using safe design principles to reduce hazards in construction, each of these were built off-site using precast concrete, which also reduced CAPEX and speeded up construction.

The seven major viaducts on the 303km route were designed by SYSTRA and built using approximately 400 standardised post-tensioned concrete box sections, enabling each bridge deck to be built in just two months.

“Providing a design that includes optimisation of maintenance and operations is an important advantage to a client or a contractor which cannot be said for all of our competitors,” says Vergnaux.

“We succeeded in honouring all of the deadlines for Tours-Bordeaux, having been given a contract date to open the line in July 2017 more than four years previously. It was opened on deadline and on budget because we were able to propose optimal design with technically efficient solutions to save cost and time.”

SYSTRA has produced all the designs for one of the world’s largest maritime causeways in support of a third party. The 36km causeway is currently under construction in Kuwait. The project demonstrates SYSTRA’s ability to support contractors when they bid for high-value tenders as part of their design proposals.

Elsewhere in the world, another example of SYSTRA deploying an innovative concept to save clients and contractors time and money is its U-shaped viaduct, which SYSTRA has developed as a quick and cost-effective solution for the construction of metro viaducts.

More than 400km of U-shaped viaduct has been constructed on light rail and metro projects across the world, including Kuala Lumpur and Shanghai, while the patented structural design also formed a key element of SYSTRA’s successful bid to design a new metro system in Bogota, Colombia, where a more expensive underground alternative had been considered.

The 302km South Europe Atlantic (SEA) high-speed line was opened in July between Tours and Bordeaux. SYSTRA was involved in all phases of its design and construction and continues to provide maintenance services, demonstrating its wide range of expertise. PASCAL LE DOARE/SYSTRA.