By using new tools, councils will be able to install electric vehicle chargers where demand is likely to be highest, SYSTRA’s David Connolly tells Deniz Huseyin

With the days of the combustion engine seemingly numbered, an acceleration of the shift to electric vehicles (EVs) looks increasingly likely. EVs still make up a small proportion of all vehicles – just 1.7% of the total new car market in the UK – but local authorities should start planning now for charging point networks, says Dr David Connolly, Director of Innovation at transport planning consultants SYSTRA.

“As the size of the electric vehicle fleet grows, we will need to ensure charging is supplied in the right places,” he says. “It is about efficient provision – that means matching the supply of chargers to the demand. If you don’t know where the demand will be, you could end up wasting money by installing chargers where they are under-used, while failing to properly meet the demand at other locations.”

SYSTRA has been considering the need for efficient distribution of EV chargers since 2015, when it first worked with the University of Strathclyde and Transport Scotland to develop a prototype of its Optimising the Provision of On-Street Recharging Infrastructure (OPOSRI) tool.

This tool is designed to help councils identify the most cost-effective future network of EV chargers. “Efficient positioning of charging points will maximise the cost-effectiveness of investment needed to encourage people to switch to electric vehicles by ensuring that appropriate charging facilities are conveniently located where and when they are required,” says Connolly.

SYSTRA trialled the protoype of the tool in Edinburgh, mapping out where a future network of publically-available on-street chargers should be. The consultant based its estimates on current and future travel demand, taking into account parking behaviour and the likely proportion of trips that would be made by EVs.

“The tool worked out how many chargers would be needed and whether they should be ‘rapid’, ‘fast’ or ‘slow’ chargers depending on the distribution of the vehicles’ expected parking duration at each location.

“Working out how well a set of chargers will meet the future demand is quite complicated, as it is tied in with parking behaviour, the proportion of the fleet that is electric, the future charging rate, the range of the vehicles and how often earlier arrivals tie up the chargers,” says Connolly. 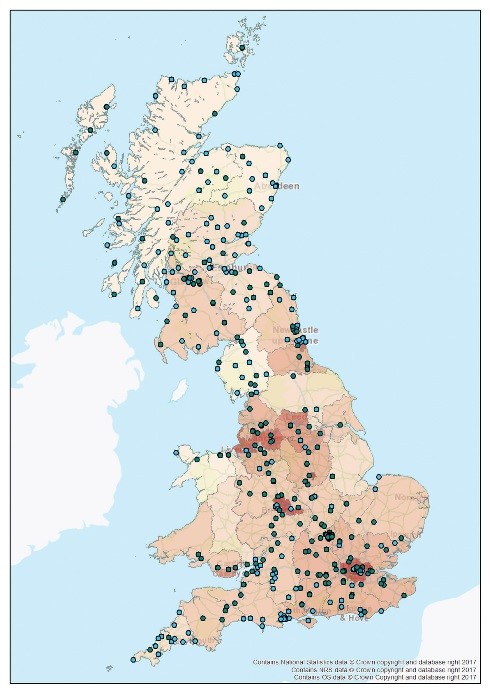 SYSTRA has recently further developed the OPOSRI model for the Committee for Climate Change (CCC), an independent public body, formed under the Climate Change Act to advise the UK and devolved governments on tackling climate change.

SYSTRA led a team of consultants including Cenex and Next Green Car, which was commissioned by CCC to help design the future electric vehicle charging network in the UK.

Two tools were developed for CCC – the first is based on the OPOSRI tool for urban parking-based charging and the second is designed to help optimise the network of rapid chargers used for en-route charging on the inter-urban road network. The main differences between these two types of charging behaviour is that, in the former, the charger is located close to the true destination (or at park & ride facilities) and the duration of the plug-in time is heavily influenced by the driver’s underlying trip, while in the latter, the locations need to be conveniently located between relevant origins and destinations, and the charge needs to be delivered as quickly as possible.

The parking tool maps out charging networks based on low, central and high forecasts of EV uptake in the UK provided by CCC. “Our first tool carries out a city-wide analysis for the needs of parking chargers, while the UK-wide model works out the optimum location of ‘filling station-style’ chargers for longer journeys,” says Connolly.

The models exclude workplace charging (most likely provided and managed by the relevant employer organisations) and off-street home-based charging for EV owners who have access to their own overnight home-based charging facilities, and so can start most long-distance trips with a full battery. This makes EV charging significantly different from conventional refuelling, where the random level of fuel at the start of a journey leads to a need for a much more uniform distribution of petrol stations across the road network, Connolly notes.

In addition to the location, availability and charging speeds, the models also take account of the pricing regimes at different locations, with the fastest chargers typically costing more to use (per kilowatt) than the older/slower infrastructure.

Connolly reckons the OPOSRI-based tool can save local authorities and other service providers significantly more by optimising the infrastructure needed to provide a given level of EV charging that they would spend on the relevant consultancy advice.

A NEW TYPE OF ‘FILLING’ STATION

Inter-urban EV ‘filling’ stations would be the equivalent of motorway service stations, although for the foreseeable future each electric vehicle will tie up a charging station for much longer that a conventional vehicle requires to obtain a tank of petrol. As a result, the number of vehicles which each charger can service is much lower and the interaction between different arrivals is much more significant, requiring a sophisticated queuing theory-based approach, particularly as the forecast percentage of EVs in the relevant future-year fleet grows over time.

“The network of inter-urban chargers will need to be planned and monitored carefully, as the percentage of EVs making long distance trips grows from ‘negligible’ to ‘significant’ and their range distribution grows,” says Connolly. “A network that provides one charger every X km (to ensure every EV journey is possible) will not cope when the percentage of EVs making long distance trips starts to rise. Similarly, a network designed for EVs with ranges of up to 50km will start to become sub-optimal when EV ranges of more than 100km start to become the norm.”

He adds: “The SYSTRA tools take account of this rapid evolution of the EV fleets, by allowing the user to test different ‘roadmaps’ to a given future-year network – for example, iteratively optimising each year in turn or proceeding via a series of ‘five-yearplans’ or as a single optimisation of the relevant future year, starting either from the current charging network or from a ‘clean slate’.”

SYSTRA’s tools are designed to calculate how commercially viable an EV network would be for the provider. “So, after the cost of installation and the price of electricity, it would show how much you would have to charge.”

Connolly believes there is a need for more integration between parking policy, EVs and other ultra-low emission vehicles. Parking charges and the provision of spaces for ‘cleaner’ vehicles should be used as a measure to encourage the uptake of electric vehicles and other cleaner technologies, particularly in cities aiming to improve their air quality and cut their greenhouse gas emissions.

But Connolly warns of the dangers of reducing the overall cost of car use, particularly for journeys where more sustainable and healthier alternatives exist. He is also interested in the transition from subsidised (or ‘free’) electric, designed to promote the uptake of EVs, to commercial networks where the providers of the infrastructure and the electricity are likely to be seeking to maximise their medium-term operating profits.

He will be speaking at Smarter Travel LIVE!