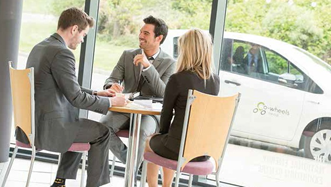 We conducted desk top research of surveys of the impact of car clubs and different types of car clubs in operation around the UK. This led us to conclude that car clubs have a very positive role to play in future transport strategy and that, as shared mobility becomes more popular, they have potential to expand significantly. A range of policy recommendations were made for TfGM and partners to assist with the expansion and uptake of car clubs in the area, including supporting car clubs in transport and planning policy, integrating car clubs into information and ticketing systems, introducing car club cars at transport hubs and interchanges and requiring new developments to include car club cars. For the local authorities, we advocated that they adopt a “Business Travel Hierarchy” where staff are encouraged first to investigate alternatives to travel (such as agile working, video- and tele-conferences), then look at cycling and public transport options, then use car club or daily hire vehicles, with grey fleet becoming the ‘mode of last resort’. One of the Greater Manchester authorities has already adopted a car club for its business travel and demonstrated 27% reduction in business mileage and 20% cost savings in the first year. Utilising Council information on their essential car user payments and business mileage expenses, we developed business cases to assess the financial and emission savings that the adoption of a Business Travel Hierarchy would realise. A subsequent commission for one of the authorities developed the business case in more detail, alongside an implementation plan and we arranged for car club providers to present their services to the authority.

Top of the page